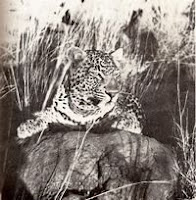 Joy always wanted to bring to freedom a leopard too and close the circle with all three kinds of big cats.Joy had tried it once with little Taga who died too early,when fate meet her and Penny.Penny was found after her mother had probably been killed.The little animal was brought to the park and they agreed to give her to Adamson.When Penny's bringing back to freedom was decided there was nothing left but finding her a home,after some searching this home turned out to be Shaba.Penny gave birth to two children but their names aren't mentioned because the book ends when her children are still very small. As with Elsa and Pippa's stories, Joy wanted to continue describe Penny's life (Martin Clarke the assistant of Joy says that : 'Penny was sighted three months after Joys death, still with her two grown up cubs. I like to think she lived a long and happy life...just as Joy wanted.﻿')
but died in a tragic accident.

Joy said leopards are the most difficult to raise because even though Penny trusted her and was tender and easy to work with Joy never felt completely calm when around her.
Публикувано от ATs в 14:35 ч.

Преглед на целия ми профил
about me
I know Joy Adanson for a few years.Years ago I decided to read "The Spotted Sphinx" because I got interested in the picture of a cheetah drinking a soft drink.This book changed completely my life and the way I think,that's why I wanna share the story of this incredible woman with you.

Hve you read any of Joy Adamson's books?