My blog wouldn't be complete without telling you a little about Elsa,Pippa and Penny.Of course I can't get all of the information described in a couple of books in just few lines so I'll include only basic facts.As I mentioned Joy didn't have children but she treated her animals with mother love and cares.It would be easy if she kept them like her pets,making her happy,saying it's the only way cause they've lost their mothers and there is no other way.But she prefered taking them back to wild life where they truly belong and can be really happy.She put her wild friends before her own comfort and health.Joy said she didn't like spending so much time living away from other people and it was hard to sent off curious visitors sometimes ,cause she really enjoyed some company.But she never allowed herself that because it would make her animals feel bad and it was dangerous for their kids to get used to humans. 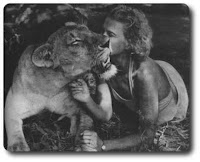 Elsa is probably the most famous of Joy's animals.The interest people showed in the book about Elsa encouraged Adamson to continue working with other wild animals.Joy got Elsa when the lion lost her mum.When George Adamson was sent to take care of a dangerous human-eating lion,he and his co-workers were attacked by a lioness and it led to her death.Later George and his co-workers found out she was a mother and just trying to protect her children.So George felt it was his duty to take care of her children.When baby lions got too big and Adamsons couldn't no longer keep them they had to send 2 of the lions to zoo.George,Joy and they workers all agreed to keep the smallest one-Elsa.Since Adamson's way of life and work allowed Elsa to be close to wild,she felt it calling her and the family decided it's better to bring her back to wild life.
Of course an animal brought up by people can't become completely independent so Joy and George had to continue giving her food.Even when she learnt to pray Elsa continues to depend on them.But she managed to brought up 3 completely independent children.First Elsa was freed in Masai Mara but couldn't stand the climate there and had to be moved in Meru national park.The local people however disliked the many guardians in the region of Elsa's home and insisted on her removal saying that since she had lived with human beings local people were endangered.Sadly Elsa got sick and had Babesia felis.She died before they had to move her gain.She had 2 children,2 boys- Jespah and Gopa and one girl-little Elsa,they all were moved to national park Serengetti after Elsa's death.Elsa is buried under the tree where she and her children used to play.Later Joy Adamson's body has also been moved there.Joy said she has never been afraid of Elsa,even when she was sick and angry,she could always trust her and depend on her and her loyalty.
Публикувано от ATs в 14:56 ч.

Преглед на целия ми профил
about me
I know Joy Adanson for a few years.Years ago I decided to read "The Spotted Sphinx" because I got interested in the picture of a cheetah drinking a soft drink.This book changed completely my life and the way I think,that's why I wanna share the story of this incredible woman with you.

Hve you read any of Joy Adamson's books?